The National Energy Administration in China have high expectations for the development of renewable energy in China in 2013. The 12th 5 year plan for renewable energy, which was launched last year set the targets for 2015 for the various technologies at a fairly ambitious level; 260 GW hydro power, 100 GW grid connected wind power and 21 GW solar power should be installed by 2015. Compared to the 2011 level this gives average annual increases of 12 GW per year for hydro power, 13 GW per year for wind power and and 4.5 GW for solar power. But NEA now expect 21 GW hydro power, 18 GW wind power and 10 GW solar power to be installed in 2013 – all higher the the average yearly targets from the 12th 5 year plan. 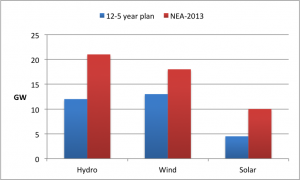 So despite the current challenges for integration of renewables into the Chinese electricity grid, including lacking regulation and incentives for distributed solar power, NEA is quite optimistic or ambitious regarding the possibilities for deployment of RE in 2013.

Are the ambitions realistic? Well past experiences have shown that massive yearly deployment is possible, so it is difficult just to judge the 2013 targets as unrealistic. On the other hand the current challenges for integration and deployment cannot be easily delt with. Action is needed to avoid curtailment by making the electricity system much more flexible. And the deployment of solar power requires focus on large scale deployment of small scale solar power systems, roof-top and building integrated systems. And the barieres for such system might be underestimated when the 2013 targets were set. However, the signals from NEA is very encouraging: RE must have a bigger role in the Chinese energy supply in the future, and with these ambitions it is sure that a lot of effort will be made to quickly remore the barriers for deployment and integration of RE.

The minutes from the NEA working meeting where the targets were set, can be found on the NEA web site. The meeting ended up with eight focus areas for NEA in 2013, including increased domestic energy supply, more renewable energy, control of the total energy consumption, preparation of an energy sector reform, enhanced international energy cooperation, more research and demonstration, electricity to people without electricity supply, and strengthen of the management of the energy sector. It looks like a quite busy year for the energy administration, also in 2013 :-).