2012 was a new record year for wind power in Denmark. Last year the wind power production in Denmark amounted to 30% of the Danish electricity consumption, while in 2011 the figure was 28,2%. This is of course good news for the global environment but due to Denmark’s small size the biggest contribution to the global environment might not be the CO2 reduction itself but the Danish showcase: It is possible to have a high share of fluctuating electricity production in the energy system without curtailment at all. And 30% is only a step towards the even more ambitious target of 50% in 2020. Right now the next off-shore wind farm is being established in Denmark – see the pictures here. (The picture below is the Danish wind farm Middelgrunden near Copenhagen on a cloudy October day in 2012). 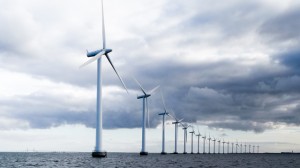 But what is the secret behind the large share of wind power, and what can China learn from Denmark?

To fully understand the Danish success of integrating wind power, you should also take into account the institutional and the “mental” framework for the electricity supply sector. In many countries – also in China – wind power is often regarded as an “add-on” to the “normal” electricity supply based on thermal power plants – fossil fuel or nuclear. The add-on RE power then is supposed to take care of its own problems, e.g. balancing the fluctuating production, and if it is not possible, then the easy solution is to curtail it, e.g. to stop the production from the wind farms, because the wind farm is causing the problem. But in Denmark, wind power is regarding as an integrated part of the electricity supply. Balancing problems is therefore a system problem, not a problem for the wind farms. This mental change in the perception of the electricity system is important for solving the integration challenges. Also the institutional set-up is important. Years ago the electricity sector was one integrated monopoly. Today the Danish grid operator (or Transmission System Operator – TSO) have been totally independent of the electricity producers for more than 12 years and it acts totally neutrally towards all power producers. Furthermore the large power producers in Denmark owns a large share of the wind power plants and integrate them into their portfolio of power plants in the daily operation. And by setting ambitious goals for the further development of RE power in Denmark (50% in 2020, 100% in 2050) the Danish government encourage both the TSO and the power producers to integrate RE in their planning process. The long term grid planning is thereby targeted at making these goal feasible, not only in Denmark but also in a European context, where the European TSO’s makes 10 years grid plans every second year.

And what are the lessons learned for China?

Firstly it is important to start considering RE power as part of the whole electricity system, not as an add-on to the thermal power system. Secondly it is urgent to setup economic incentives for flexibility for the power producers and for the use of local and regional transmission lines. Dynamic pricing is essential, but it is not necessary to introduce a complete market-setup to create this – a system with the system dispatch centres as vehicles for flexibility could be establish without a full market, like in Denmark where the electricity market evolved over a number of years, starting with more simple measures. When such economic incentives are in place, I am quite sure that the technical solution like flexible thermal power plant and heat storage at the CHP plants would develop rapidly.

Also an integrated planning process combining grid planning with planning for energy efficiency and energy supply would strengthen the integration of renewables, the development of smart grids and the use of the energy demand as part of the overall system flexibility. Maybe China could get inspiration from the European approach with the 10 year grid development plans and market studies with an even longer time horizon.

Of course China is China, and she has to develop her own solutions to the energy challenges. The Danish experiences and lessons in integration of RE can however support the analytic development of measures, methodologies and processes, which are necessary for the development of a sustainable energy system with a high share of RE in China. The Sino-Danish RED program is one example on how China and Denmark work together on such a development.