A well-functioning carbon trading system could have profound impact on the future Chinese energy system together with other policy measures. The carbon trading system together with implementation of a nationwide electricity market can give strong incentives for further development and integration of renewable energy sources like hydropower, wind power and solar power.

Crucial for the long-term impact of the system is the detailed allocation mechanisms and the amount of emissions quotas available for the market. It is important that the system, also in the initial phase, creates the right economic incentives for an energy transition towards green and low-carbon technologies in order to allow for economic growth within the framework of an ecological civilization.

Read my opinion on China Plus 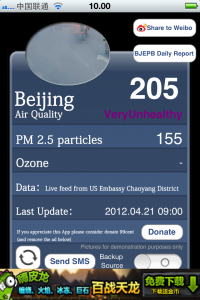 Today is yet another day in Beijing with gray sky and “Very unhealthy” air quality, at least according to the measurement from the US Embassy in Beijing (see the screen dump from my phone). But the Beijing Government is now acting on the bad situation.

In February the local government launched its plan for air quality improvement measures to be implemented this year in Beijing, as referred in China Daily. The city will cut PM 2.5 levels by 15 percent by 2015 compared with 2010 levels, and cut overall air pollution levels by 30 percent over the same period.

The plan includes the following items:

In March the measures were further explained in China Daily by Zhang Gong, head of the municipal Development and Reform Commission:

In spite of the good intentions quite a lot Beijingers  would think that the plan is too little and too late, taking the current bad situation into account.

Luckily it is likely that a new initiative will further promote the efforts to improve the air quality in Beijing. Earlier this year the National Development and Reform Commission announced it would launch carbon-trading systems next year in five cities – Beijing, Tianjin, Shanghai, Shenzhen and Chongqing, as well as in Guangdong and Hubei provinces. Beijing is now preparing for setting up the test trading system next year, according to a recent article in China Daily. The system will include both energy producers and energy consumers and will push for a substitution of coal with natural gas which has a lower content of CO2. More than 600 companies and industries with a carbon emission of more than 10,000 tons per year will be included in the trading system. An overall target for the quotas has not been fixed yet; it will be linked to city’s target to lower its carbon intensity – the amount of emissions per unit of GDP produced – by 18 percent during the 12th Five-Year Plan (2011-15).

The implementation of the test trading system in the five cities and two provinces is an important step towards a more general CO2 quota system in China. Experiences from Europe show that a trading system is difficult to manage and might have the opposite impact if not set up correct and fine-tuned to changing circumstances. It shall be interesting to follow the implementation in Beijing – hopefully with utilisation of the European experiences to avoid the pitfalls and hopefully with many more “Blue-sky” days in Beijing as result. I am looking forward to be able to go by bike to work without using a mouth filter to survive!

The pollution in Beijing is now being discussed on ing.dk (in Danish of course) so I would contribute with a couple of pictures from Beijing today where the pollution is very low and the sky is very blue :-). 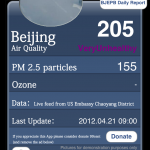 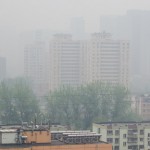 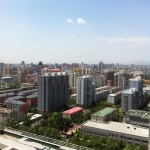 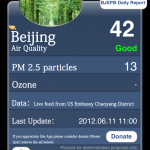 Apparently senior officials from the Ministry of the Environment find the US Embassy measurements illegal. Read more here.