The latest market report from GWEC is encouraging reading for the Chinese wind industry, but the main challenges for the future development are still not solved. 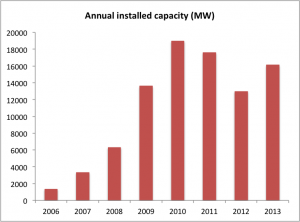 For the Chinese wind industry this is good news. The Chinese wind manufacturers are totally depended on the Chinese market – only the biggest companies have succeeded in global activities on a small scale – and the last couple of years have been a nightmare for a number of companies with Sinovel as the most known. And a level of around 18 GW annually would give new wind to at least the biggest and most competitive companies.

But the crisis in the Chinese wind industry is probably not finished yet for several reasons.

Firstly, the main barriers for integration of wind power into the Chinese energy system have not be removed. In average more than 20% of the potential wind power production is curtailed on a yearly basis, and some wind farms experience more than 40% of the yearly production is curtailed. Needless to say that this is jeopardizing the economy of the wind farm projects if this continue. The integration issue is first and foremost a question about the right incentives for the thermal power plants to be more flexible – the cure is quite clear, but such institutional changes require a strong hand from the whole government and coordinated effort from a number of different ministries.

Secondly the Chinese government aims to gradually reduce the size of the Feed-In-Tariff, which again puts strong requirements on the future development of the wind turbines to lower the total cost of energy – both the investment cost but not least improving the reliability and reducing the operational costs.

Thirdly the requirements from the grid to the wind turbines are increasingly strong. This is necessary in order to technically integrate a larger share of wind power and also in line with the global development, where wind turbines more and more is considered as “normal” power plants with requirements or delivering different types of services to the power system. This put even more pressure on the Chinese wind manufacturers to be innovative and deliver with high quality. On the other hand – if the Chinese manufacturers can deliver to the future Chinese market they will also be able to compete on the global market to the benefit of the global development and deployment of wind power.